This edition of Mahabharat, translated into Armenian was published in 2001, by NOR-DAR publishing house sponsored by the Embassy of India in Armenia.

An Epic of Wisdom, Beauty and Joy for Ever 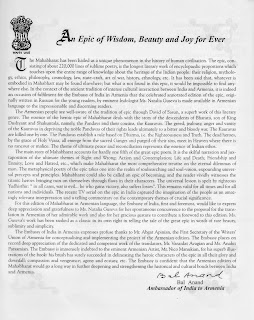 The Mahabharat has been hailed as a unique phenomenon in the history of human civilisation. The epic, consisting of about 220,000 illness of sublime poetry, is the longest literary work of encyclopaedic proportions which touches upon the entire range of knowledge about the heritage of the Indian people: their religion, mythology, ethics, philosophy, cosmology, law, state-craft, art of war, history, ethnology, etc. It as been said that, whatever is embodied in Mahabharat may be found elsewhere; but what is not found in this epic, it would be impossible to find anywhere else. In the context of the ancient tradition of intense cultural interaction between India and Armenia, it is indeed an occasion of fulfilment for the Embassy of India in Armenia that the celebrated annotated edition of the epic, original written in Russian for young readers by eminent Indologist Ms. Natalia Guseva is made available in Armenian language to the impressionable and discerning readers.

The Armenian people are well-aware fo the tradition of epic through David of Sasun, a superb work of this literary genre. The essence of the heroic epic of Mahabharat deals with the story of the descendants of Bharata, son on King Dushyant and Shakuntala, namely the Pandavas and their cousins, the Kauravas. The greed, jealousy, anger and vanity of the Kauravas in depriving the noble Pandavas of their rights leads ultimately to a bitter and bloody war. The Kauravas are killed one by one. The Pandavas establish a rule based on Dharma, i.e. the Righteousness and Truth. The dead heroes, by the grace of Holy Vyasa, al emerge from the sacred Ganges and purged of their sins, meet in Heaven where there is no rancour or malice. The theme of ultimate peace and reconciliation represents the essence of Indian ethos. 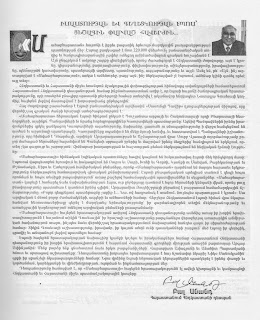 The main story of Mahabharat accounts for hardly one fifth of the epic poem. It is the skilful narration and juxtaposition of the ultimate themes of Right and Wrong; Action and Contemplation; Life and Death; Friendship and Enmity; Love and Hatred, etc., which make Mahabharat the most comprehensive treatise of the eternal dilemmas of man. The metaphysical poetry of the epic takes on into the realm of soul-searching and soul-vision, expounding universal precepts and principles. Mahabharat could be called an epic of becoming, and the reader vividly witnesses the titanic heroes bringing ruin on themselves through flaws in their characters. The universal lesson is spelt by righteous Yudhishthir: “in all cases, war is evil… he who gains victory, also suffers losses”. This remains valid for all times and for all nations and individuals. The recent TV serial on the epic in India captured the imagination fo the people as an amazingly relevant interpretation and telling commentary on the contemporary themes of crucial significance.

For this edition of Mahabharat in Armenian language, the Embassy of India first and foremost, would like to express deep and gratefulness to Ms. Natalia Guseva for her spontaneous concurrence to the proposal for the translation in Armenian of her admirable work and also for her gracious gesture to contribute a forward to this edition. Ms. Guseva’s work has been ranked as a classic in its own right in telling the tale of the great epic in words of rare beauty, sublimity and simplicity.

The Embassy of India in Armenia expresses profuse thanks to Mr. Abgar Apnian, the First Secretary of the Writer’s Union of Armenia for conceptualising and implementing the project of the Armenian edition. The Embassy places on record deep appreciation of the dedicated and competent work of the translators, Mr. Nico Manukian, for his superb illustrations fo the book: his brush has surely succeeded in delineating the heroic characters of the epic in all their glory and downfall; compassion and vengeance; agony and ecstasy, etc. The Embassy is confident that the Armenian edition of Mahabharat would go a long way in further deepening and strengthening the historical and cultural bonds between India and Armenia.