Faiz A. Faiz - Romancing the Revolution 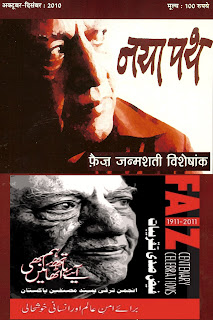 Since my return to Delhi in retirement in 2004 after crisscrossing the continents for consecutive 21 years-including 777 days in Pakistan during 1992-94 - my 1st day of the new year has been invariably celebrated attending the day-night cultural function dedicated to the memory of Safdar Hashmi. Safdar was a political street-theatre activist in mid–thirties of his life when he was martyred on this day in 1989 by goons of a Party never tired of invoking the name of Mahatma Gandhi. This multidimensional event showcasing music, drama, poetry, painting, book-sale/souvenirs, etc - all embracing revolutionary, secular, progressive causes - has come to personify the touching simplicity and dignity of nostalgic grandeur of all that the Marxist and progressive ideology has stood for. The themes of 150 years of 1857 / Birth Centenary of martyr Bhagat Singh; threats to freedom of expression of artists and tribute to Chhatisgarh - theatre fame Habib Tanvir have been the focus of special celebration in the recent years. I have been expectantly looking forward to what signature tune - and tone - of the national cultural consciousness would be ushered in for the new year in the lawns of Vithal Bhai Patel House, boasting an all-weather-withered grass!
It was indeed immensely impressive and appropriate to find that it was ‘Faiz Hi Faiz’ as the theme of the year 2011 to herald the year long activities in India, Pakistan and all over the world - where ever a few ‘Deewanas - aficionados’ of Ghalib and Gorakhpuri’s medium of poetic expression happen to lie! As on 13th February, the 100th birth day of Faiz (1911 - Nov.20, 1984), more than 60 countries have already announced various kinds of functions dedicated to the memory of the poet with a global vision of the relentless struggle for the freedom, justice and dignity for the oppressed and exploited humanity. The internet has surely become the most potent instrument of revolutionary upsurges in ‘globally-wired-connected community’ - including the celebration of centenary of Faiz. The poet of people would have certainly penned his most lyrically eloquent poem in praise of ‘internet’ which has united the largest ever number of people in history!
The Safdar Hashmi Memorial Trust (Sahmat) function was indeed a very generous (the word, ‘Faiz’, interestingly means generosity, bounty, beneficence) and imaginative treat for the indulgent and ‘well-versed’ audience which included Minister Jai Ram Ramesh (not the slightest protocol fuss) and controversially dazzling Arundhati Roy not to speak of so many stalwarts of the progressive platforms led by historian Prof Bipin Chandra and jeans-shawls adorned youthful Tulba-university students. The Shamiana venue was tastefully decorated with the calligraphic posters of proverbially quoted shae’rs - poetic couplets - of Faiz. The popular lyrics - Ghazals - of Faiz were soulfully sung by Rekha Raaz while recitation of select Nazms - longer compositions - by film-maker activist Sohail Hashmi and scholarly Syeda Saiyidana Hameed were a rare delight to listen - in their impeccable Tallafuz-accent of Urdu which Faiz himself might have envied!
The solid and the most significant content of Sahmat function was, of course, the release of the ‘Faiz Centenary Special’ commemorative issue of quarterly in Hindi, ‘Naya Path - New Path’, Vol. 24, Issue 4, Oct.-Dec. 2010, Price Rs 100. The journal is an organ of Janvadi Lekhak Sangh - Peoples’ Writers Union. The impressive publication of 432 pages, with four portraits of the poet by eminent artists is indeed a collectors’ item for Faiz aficionados. The editorial under title, 'Yun hi uljhati rahi hai zulum se khalaq - the people have, for ever, risen against tyranny’ underlines that celebration of Faiz’s birth centenary is becoming a part of the incessant struggle of the oppressed against the oppressors. Faiz was a firm supporter of friendship between India and Pakistan and considered it to be vitally important for peace and prosperity in the region and beyond. He remained in the forefront in the movement for restoration of liberal democracy in Pakistan and his ideas expressed in exquisite poetry were indeed a source of strength, inspiration and solace for the terrorized masses. It is particularly pointed out that the publication has brought forth for the first time the views of younger poets of Hindi explaining how they are indebted to Faiz for their creative energy and inspiration. The special number has four parts - titled respectively, the Mirrors of Memories; Conversations via Letters; Faiz’s Select Poetry/ Essays and In the Eyes Literary Critics. The publication has even endeavored to bridge the Urdu-Hindi divide by explaining meanings of less familiar words in the select poetry in it.
The Faiz Centenary Calendar, 2011 released by SAHMAT has 6 evocative paintings by M F Hussain - 'Faiz - A Portrait'; 5 paintings with quotations of Faiz poetry - Aaj ke naam aur aaj ke gham ke naam… to the present and sorrows of present…; Zuban pe mohar lagi hai to kya… It matters not that the lips are sealed …; Mere Qatil, mere dildaar mere paas raho… my tormentor, my love, be near me…; Nisar mein teri galion pe ae vatan… I abandon myself defenseless to your streets ,my country…; hamne jo tarz e fughan ki thi qafas mein iizaad… lamentations which we had created in cage…. Mazrooh Sultanpuri is quoted proclaiming Faiz as the Meer Taqi 'Meer' of progressive poetry while Raghupati Sahai 'Firaq' Gorakhpuri observes that, "enlightened wisdom, sensitivity and artistic finess with which Faiz combined affairs of the heart with other social concerns was something novel and unique in Urdu poetry."

For me at a deeper person level, introduction to the poetic magic of Faiz was made some time in May 1956 during a local conference of the Communist Party affiliated Primary School Teachers Federation in my small town, near Ludhiana. I, freshly promoted to Sixth class, was hanging around the venue of the conference because my uncle, a teacher, was closely involved in organizing it. I can distinctly recall how the lines of Faiz’s celebrated 10 line poem titled, 'Tarana - Chorus Song’ recited by teacher Bahadur Singh had, as if, pierced into my soul. Later, I was to know more about this poem of Faiz but must quote first the memorable lines:

The free translation by me cannot do justice to the ringing rhythm of the original. How fascinatingly strange that these very lines were echoing in my ears thirty two years later in the winter of 1978 in Tehran when I was a witness to surging street protests against the Shah of Iran!
I was further privileged in Tehran to enjoy the most instructive company of great poet and critic Ali Jawad Zaidi (1916-2005) who had himself been a leading light of progressive movement. Zaidi observes in his celebrated classic, 'History of Urdu Literature', "Faiz raised his voice in support of freedom of expression… He has created new symbols or imbued old ones with new meaning and has a knack for conveying … the most fiery sentiments in a misty tone which cast a spell on the reader … His real greatness lies in utilizing the traditional erotic imagery to express the patently social aspirations and conflicts without being obviously didactic about a theme which invites a semi-philosophical approach. He absorbs the agony of the wounds time has inflicted on his poetic being to recreate his experiences into a moving symphony of words."

When I landed in Lahore in the evening of 6th of September 1992, it was the lines of Faiz haunting my thoughts - "Ae roshnion ke shahar - O, city of Lights…" So many kind friends in Pakistan including Faiz’s poetic inheritor Ahmed Faraz narrated to me tons of anecdotes to bring out how Faiz was a (Sufi) saintly soul, a rare gentleman and a friend-philosopher to a generation of struggling creative individuals in Pakistan and India. The current state of affairs in Pakistan, particularly the atmosphere bloodily surcharged by the religious extremism in the wake of broad day killing on 4th Jan. of Faiz’s nephew, Governor of Punjab, Salman Taseer made Faiz’s daughter Salima to recall her father’s verse:

A statement made by Progressive Writers Association ( PWA) of Pakistan on Faiz centenary has emphasized, "…when identity of Pakistani people has been severely tarnished by self - appointed protagonists of Islam who are engaged in heinous crimes against humanity, there is no one better than Faiz to project the real self of the nation…". The PWA, Pakistan has invited all to protect and project all the ideals and central concerns of Faiz’s poetic vision. In Pakistan, the Association has called upon to promote peace and harmony amongst people of all races and nationalities, transcending religious, ethnic and linguistic differences and, globally, to represent Faiz as the ambassador of the soul and feelings of people of Pakistan, with the theme of Faiz centenary:

The two most esteemed souls I had the unique privilege to know and who knew Faiz so well - AJ Zaidi and Ahmed Faraz - would have surely more to add to the statement by PWA, Pakistan.