The Great Memories of Great-Grandfather

This article was contributed to the prominent diaspora website in the USA, "India of the Past" in 2019

IT WAS October 2018. I realised - as if in a flash - on the night of 18th October that the next day was the 71st anniversary of passing away of my most beloved and esteemed great-grandfather – a unique Guru, a tactful teacher, a versatile scholar and renowned Vaidya of his time, Shri Pramatmanand ji.

As a child of about 4 years at that time, I have rather very vague - बहुत धुंदली सी - but distinct memories of the day. I had lost my mother about a year earlier and, therefore, used to spend more time in the loving care of my Naanee (maternal grandmother) Bishan Kaur, though my two great-grandfathers - Giatanand ji and Pramatmanand ji, not to speak of the grandparents - Dwarkanand ji & Dadee-maan Dhan Kaur, and the two paternal / grand paternal aunts simply adored me.

Father, reflecting a serious demeanour and seen mostly busy doing this or that work, seemed somewhat of a distant and forbidding figure. Perhaps, in those times, young fathers in large joint families, were also treated by the elders at home more in terms of grown up children! And they, in turn, might also have felt a bit shy or were not yet accustomed to be openly affectionate towards their own children, more particularly when there were several seniors always lurking around to do so! I was, as I have been told, a very healthy, playful and well adorned child-ever ready to ‘play’ with anyone who was imaginative enough to attract my attention and interest. 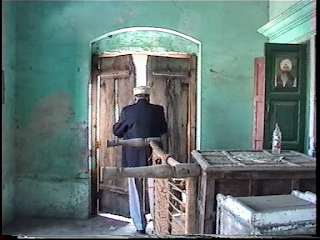 Baba ji Pramatmanand ji would often like to have me by his side in his Baithak - an all-purpose larger room serving as pustkalaya (library); lekhanalya (room for writing books); aushdhalya (room with open Almirahs with lines of bottles of medicines); shishyalya (teaching room), sangityalya (with musical instruments lying around) and above all, the play-corner of his most beloved great-grandson, i.e., me – the first born of the 7th generation of the known history of the family! I was reputed to be the apple of his eyes – the fulfilment of his prayer; reputed to have been named by him even before my birth, after the name of a legendary saint scholar of a historic seminary of Amritsar! What an ironically tragic twist of destiny that it had taken me more than sixty years to cross the threshold of and enter this most pious premises, once the hallowed seat of imparting knowledge and wisdom by Vaid Bhushan Param Sant Pramatmanand Ji, my revered great grandfather !!!

On the fateful day of his passing away, I had been, perhaps, specially fetched – carried mostly on shoulders during the journey on foot by my maternal uncle, Jawala Singh from village Jandali, of my recently deceased mother, Malkit Kaur. It was located near the historic town of Payal, on Sirhind Canal, 7 Koh i.e., about 17 km from my parental village, Falaund Kalan. I recall that the Bawan – decorated bier for funeral procession – bedecked with flowers and buntings had in front the group of Band-baja musicians – Muslims professionals called from the nearby city of Malerkotla. The silently grieving women were moving behind the men folk. I, the Jyeshath - first born-great-grandson, was carried on his broad shoulders by my well-built maternal uncle Jawala Singh. I was waving ritually the Chaur – fly whisk – over the bier. This funeral procession, in a solemn tradition but not in overly sorrowful atmosphere, was symbolic of the expression of completion of a life of fulfilment of the most respected and distinguished elder of the family.

The bier had been brought into the exclusive family cremation ground near the more than hundred-year-old Samadhi - mausoleum - of family patriarch Baba Gajjan Shah. My father was being given instructions to light the pyre. Pramatmanand Ji’s had no child and my father, Haridialnand, was his adopted grandson and the brightest shishya (pupil). He had been rigorously groomed since childhood by his Guru-grandfather to be the true inheritor of his mantle of all the multifarious scholarship and spiritual learning.

Minutes before my father was all set to light the pyre as per the ritualistic ceremonies, an army official, Ram Singh, belonging to our extended family, happened to arrive unannounced on his long awaited vacation after World War II. He was last known to have served in Italy. He had been able to bring with him a camera – something quite rare in those days in any village. He had immediately rushed to our exclusive cremation place. He politely interrupted the Agni-dah - lighting the fire - ceremony for a while, and clicked a photo of the group standing by the side of the mortal remains of the departed noble soul. I could discover the copy this small size photo in one of the family books when browsing through them after the death of my father in April 1978. Though not very clear in details, the enlarged photo has been indeed a rare monumental image capturing the moment – just before the mortal remains of the great soul were consigned to flames of fire. 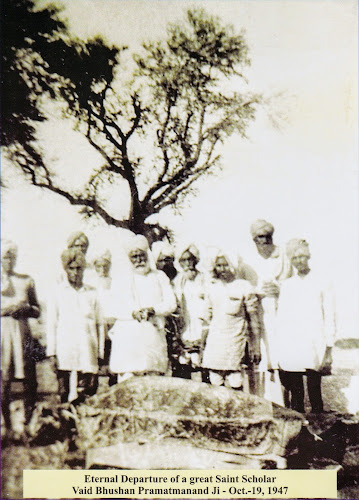 I have some deeply distant recollections of the largely attended get together at the Antim Ardaas – the last Prayer function on 9th November 1947 – marking the completion of Shri Akhand Path, he uninterrupted 48 - hour recitation Shri Guru Granth Sahib. The people of the Punjab were still under spell of great gloom over the barbaric violence in the wake of Partition of India. Our village was part of the area of Muslim state of Malerkotla, and the rulers called ‘Nawabs’, had been held in high esteem by the people. The Sikhs recalled with admiration and gratitude the historic bold stand taken by Nawab Sher Mohammad Khan (1672-1712) when the two innocent young sons of Guru Gobind Singh were bricked alive by the governor of Sirhind in 1705. The territory of Malerkotla had remained comparatively quiet during the worst killings of Muslims in East Punjab. Sadly, the last Nawab Ahmed Ali Khan had passed away on 18th October 1947. I think that I had heard people talking to suggest that noble people like Nawab Sahib and Pramatmanand Ji were departing this world because such noble souls cannot withstand the barbarity, inhumanity and utter cruelty of the time!

In September 2019, I was able to retrieve the old family ‘red-book’ of ceremonial records and the various traditional financial dealings. My father had been tutored to cultivate a habit of recording most meticulously the minutest details of the various social and religious ceremonies. He did the same after the passing away of Pramatmanand Ji, including the mention of the exact amounts of various expenditures involved. He has, among many other details, recorded, “The Most Pious 108 Sant Baba Pramatmanand Ji breathed his last at 8p.m. on Saturday, 18th October and Biwan dwara agni sanskar was performed at 4p.m. Sunday, 19th October.” The Community Feast had been arranged on 4th November. The Function of the completion of Recitation of Granth Sahib had taken place on 9th November. The Musicians of the band for funeral part had been paid Rupees 15 - a significant sum in those days; cost of wood for the pyre was Rupees 23, and 64 coins of double Paisas - large sized copper coins - were thrown around during the journey of the funeral procession! The family Guru – a dignified Bedi Sikh, a presumed to a direct descendant of family of Guru Nanak Dev Ji - had been given a ‘Dakshina’ of Rupees 11!

Then in October 2019, I also came across revealing references in Haridwar in the records of the family Purohit - Pandits including the signatures of many elders who had gone there to immerse the ashes of the members of the family. In 2009, we had discovered a copy of a long letter, more than 2000 words, penned sometime in 1945 by Pramatmanand ji to his young nephew who had joined the Army. It was about the conflict of litigation over family lands by his maternal grandfather, and it amply revealed his anguish over the unnecessary family feud. I have been keen to highlight his legacy of multidimensional scholarship Pramatmanand Ji, particularly his original hand written works, in Gurmukhi script, of Ayurveda and commentaries on the sacred texts Hindu-Sikh spiritual tradition. One big book, called ‘Moattam Sahib’, contains thousands formulations of ingredients of very special Ayurveda medicines, considered strict secrets like - present day patents. I am glad that Gajjan Bilas, the biography the family patriarch authored by him in Brij-Bhasha, has been long last published.

I have been speaking to the elderly persons in the village - not many survive now - who had personally known Pramatmanand ji. A very senior cousin who was the first in the area to do Masters in English in 1950 - and had then joined the Indian Revenue Service - had told me several interesting anecdotes about the scholarly Baba Ji. When asked about his education, Baba Ji was fond of saying that he had studied in the University of Himalaya Parbat. Similarly, when as a high school student he had once angrily spoken to Baba ji, ‘There is no Rabb-God… all talk about Him rubbish.’ According to him, Baba Ji affectionately drew him closer to his bosom and spoke very softly and sweetly, ”Son, first of all, one should not be full of any anger when trying to understand any deeper and complicated problem!”

It was my destiny to go around the world as the representative of India and have the privilege to meet the most magnificent personalities in various fields. In an inexplicably mysterious way, I feel that my pilgrimage on the path of particular point of view of life had indeed begun very early - in the most ennobling lap of my great grandfather, an extraordinary saint scholar who had devoted every second of his earthly sojourn in the love of learning the art and science of healing- of the human mind, body and spirit!