Indian Diplomat's Wife - on Life and Time in Saudi Arabia

OF ALL the members of the diplomatic corps there are a large number who leave an indelible mark on the social register of the place of their posting.

Riyadh has been witness to many incoming and outgoing diplomats. There have been many whom we’ve met through these columns and have remembered long after.

Mrs. Aradhana Balanand, wife of Bal Anand, Minister at the Indian Embassy in Riyadh, though outwardly reserved and soft spoken, has a warmth and codiality of personality which has endeared her to people as much as her husband.

The Bal Anands will soon be leaving these shores for another posting. We wish them the best.


Please tell us something about yourself? I was born in a town situated on the River Ravi in the Punjab. As my father was an officer in the Indian Railways, I ad opportunities from the very beginning to travel with my family to the far-flung regions of India: the lush green Assam; the ancient city of Patna in Bihar; Gorakhpur in Uttar Pradesh; the state of Rajasthan, known for their valor its people and their colorful desert life traditions. After a brief stay in Allahabad, the city Nehrus, I came with my family to New Delhi which became my home after my marriage. The most enduring memories for me are the luxuriously long travels with my brothers and sisters by train speeding through the vast stretches of villages, cities, jungles, hills, etc. and the myriad sights of Indian people on the railway platforms.


Could you tell us about your country?


As referred earlier, I have been fortunate to experience the amazing variety in India of the cultural traditions, social customs, food habits, languages, costumes, etc. This variety of living patterns has been shaped by the conditions of climate and the immediate environments.

I have, however, noticed that strains of cultural similarity and a shared destiny have always existed among the people of India who have chosen to be united by the secular and democratic political system of independent India. The genius of Indian civilization, perhaps, lies in its ability to absorb and encompass the many cultures it has come into contact with. Many races and faiths have made their home in India and have contributed to the richness of the composite culture of the land.

Islam came to India in the century of its birth and the Islamic impact on the art, literature and architecture has been inestimable.

The prismatic beauty of the cultural traditions is best exhibited during the folk festivals and fairs which are typical to every region of India. There have been systematic efforts to preserve and nourish the popular and folk dances, arts and crafts, and songs. The means of modern mass media have certainly been a great help in this. At different places of our stay, our houses had typical local fruits, flora and fauna. I have vivid memories of the fruit-laden mango trees which we would eat to our hearts' content, inviting sometimes even sickness by overeating the delicious fruit!


How would you compare your life here to that of India?


While thinking of the comparison between life in the Kingdom with that in India, I must say that there are many similarities between them, particularly the fact that the family is the pivot around which the life revolves. The city of Riyadh offers secure life with all the modern comforts. During my brief travels to different parts of the Kingdom, I have been impressed by the facilities available to the people. The Asir region which is so full of natural beauty. The modernization in terms of economic and industrial development in the Kingdom has indeed been impressive. The presence of a large number of Indians, including a significant sprinkling of highly qualified professionals, adds a special positive dimension of the stay of the Indian diplomats in the Kingdom.


What are your impressions of the different countries you have visited so far?


The duties of my husband have taken us to different countries fo the world and have found each of them beautiful and lovable in its own peculiar ways. We have been posted to Iran, Maldives, Romania and Spain before our arrival in the Kingdom. We have been blessed with the kindness and generosity of friends in all these countries.

We have been surprised and touched by the deep knowledge and genuine regard for the heritage of India of many friends though had never been to India. For example, in Romania, Rabindranath Tagore is the most popular poet and the students of Bucharest study Bengali and stage plays of Tagore. Similarly, the Spanish tourists love Rajasthan and the Himalayas. We continue our contacts with many friends in the countries of our previous postings and we hope to have a similar experience after our stay in the Kingdom.


What do people want to know the most of India? 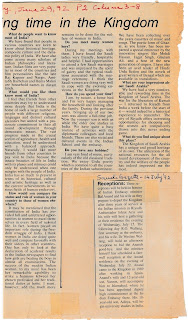 We have found that people in the various countries are keen to know about historical heritage, composite culture and the dynamic polity of India. We have also come across many scholars of Indian philosophy and literature. Indian films are very popular in most of the countries and film personalities like the late Raj Kapoor and Nargis, Amitabh Bachchan and Hema Malini are household names in distant lands.


What would you like them to know most of India?


I feel that friends from other countries may try to understand more deeply that India is the home of such a large number of people with different religions, languages and distinct cultural identities but united with a passionate commitment to their all round development through democratic means. The vast progress made in the crucial sectors of agriculture, health and education, need be understood with a balanced approach. Naturally, I would like more friends from other countries to pay visit to India because the innate beauties of life in India with its pluses and minuses could only be understood when one mingles with the people of India. India has so much to present in terms of its historical, cultural and artistic heritage as well as the current achievements in various fields of human endeavors.


How would you compare the status and role of woman in your country to those of women elsewhere?


It may be mentioned that the constitution of India has provided full and unfettered opportunities to women to excel themselves in every field of national life. In fact, women played an important role during the freedom struggle of India. I think women in India are doing quite well and compare favorably with their sisters in other countries. One has only to look at the declaration of academic results in the Indian newspapers to find how girls are beating the boys in almost all examinations. The success of the modern Indian woman, to my mind, has been her remarkable capability to strike a harmony between her chosen profession and her traditional duties at home. I must, however, add that much more remains to be done for the welfare of women in India.


Do you meet many women here?


During my meetings with them, I have found Saudi ladies very friendly, hospitable and helpful. I had opportunities to attend a few Saudi marriages and was impressed by the spirit of gaiety and the typical traditions associated with the marriage ceremony. I think the Saudi women are doing very well to cope with the evolving environs in the Kingdom.


How do you spend your time?


I am, by nature, a home bird and I’m very happy managing the household and looking after the family. During the previous years, bringing up of our two sons was almost a full-time job. Now the younger son is with us while the elder one studies in India. We have quite a busy routine of activities with the diplomatic colleagues and local friends. There are also social and cultural events in the Indian School and the embassy.


Do you have any hobbies?


I am very fond of music, particularly of the old classical tradition. We enjoy Urdu poetry which is common to all the countries of the Indian subcontinent. We have been collecting over the years cassettes of music and songs. The poetic form of Ghazal, as you know, has been imparted a special eminence by the innovative singers like Mehdi Hassan, Jagjit Singh, Gulam Ali, and a host of the new generation of singers. I have also been an avid reader of Hindi/Urdu fiction and the novels of great writers of Bengal which are available in translations.


What are your impressions about Saudi Arabia?


We have had a very comfortable and rewarding time in the Kingdom of Saudi Arabia. The war for the liberation of Kuwait - I returned to Riyadh from India a week before the start of it - would indeed be a historical experience to remember. The city of Riyadh offers interesting opportunities for shopping and the women are compulsively drawn into this never ending game.


What do you find unique about this place?


The Kingdom of Saudi Arabia has a unique and proud heritage of its own. The utilization of the national resources for the all round development of the country and the welfare of the people has indeed impressed me the most.


Three receptions will be held in honour of Indian Embassy minister Bal Anand and his wife as they prepare to depart the Kingdom after three years of service at the Indian mission in Riyadh. Ambassador Ishrat Aziz and his wife will host a gathering at their residence the evening of Wednesday, July 15. The following day R.O. Wallang, first secretary at the embassy, and his wife, Dr Wesline Wallang, will hold an afternoon reception to bid the Anands good-bye. And the minister himself has scheduled a farewell reception at the Anand residence on the evening of Wednesday, July 22. Anand came to the Kingdom in 1989 after working in Spain. Anand’s wife and 12-year old son, Varoon, will accompany him to Islamabad, where he has been appointed deputy high commissioner at the Indian Embassy there. His 18-year-old son, Aditya, will begin university studies in India.