In time of terrorism, Pakistan seeks peace in Sufism 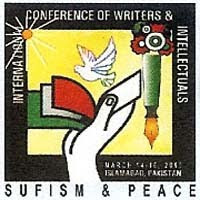 AT the first sight, it indeed appeared a bit intriguing to me to receive an e-mail invitation on 6th February for, 'International Conference of Writers & Intellectuals on "Sufism and Peace" to be held in Islamabad from March 14-16, 2010. That it was being organised by Pakistan Academy of Letters (PAL)/Government of Pakistan seemed OK but it was the name of Mr Fakhar Zaman, Chairman of PAL which was reassuring and made me inclined to think positively about my participation in it. Fakhar Zaman has been, like an inspired and dedicated Sufi, steadfastly pursuing the ideas of nourishing Indo-Pak forums for friendship and creative interaction.

The tougher question, of course, seemed to be the timing of the conference - the Sufi Discourse under the alarming shadow of terror looming large on all horizons in Pakistan!

While keeping fingers crossed till the last about availing this tempting opportunity of revisiting Islamabad after more than fifteen years, I soon started pondering over all the aspects of the topic of the Conference. I could recall how as a school child of seven, I was taken by my father to the dim lit Dharamshala for an evening of Sufi music by eminent Qawwals of Malerkotla who had come to perform during the Lohri festival (1952) in our village; all that I still remember is that they were singing one of the 'Qaafis' of Bulleh Shah with its refrain, 'Aap Yaar binan nee Rabb Rehnda...God cannot live without a devoted lover!' After a few years, I chanced to find a book at home, with its sides eaten by the white ants: it turned out to be, 'Rubbayiyat of Omar Khayyam' with a remarkable poetic translation in Panjabi with full rhyme by S. Gehal Singh, a Retired judge. I could soon learn several of them by heart - and can recite even today !

Later while doing my Intermediate in the Govt College Malerkotla during 1959-61, we had a textbook of Panjabi poetry titled, 'Purana Makhio', ie 'Old Honey'. Prof Iqbal Singh, a short and rotund Sardar migrant from District Jhang with his typically pronounced accent of Panjabi, particularly vowel 'o'-a tingling for us Malwais of South of Sutluj - taught us poetry of Baba Farid, Bulleh Shah, Shah Hussain, Sultan Bahu, Baba Vajid, etc, explaining at length the meanings and contexts. All that has endured with me and how ecstatic to listen that poetry sung by talented singers like Jagjit Singh (class fellow in 1961-63), Hans Raj Hans, Jasbir Jassi etc. While doing my MA in English in Goverment College Ludhiana, we knew from friends doing MA in Panjabi how Prof Gulwant Singh was an authority on Sufism and Prof Pritam Singh has done a scholarly research on Baba Farid. After joining Indian Foreign Service, my first posting was to Iran and a rare satisfaction for me was the opportunity on 22nd March, 1977 to have made pilgrimage to Omar Khayyam's mausoleum in Nishapore. I could visit monuments of Hafiz & Sheikh Saadi much later in 2000. In Spain, I could visit the monastery of Saint Teresa of Avila (1515-1582 AD), the Christian soul - sister of celebrated Sufi saint Rabiah of Basrah(717-801 AD)

The terrorist’s attacks in Lahore on 12th March and anxiety expressed by family and friends in this context notwithstanding, I was able to take them into confidence and boarded evening flight to Lahore on 13th March, overruling fears by my wife, reminding me of lines in Julius Caesar. I was immensely relieved to meet at Indira Gandhi International Airport other friends including author Pran Neville (famous Lahori); former VC Jamia Millia Shahid Mahdi;the veteran of AIR and eminent Urdu poet Zubair Rizvi; Satish Jacob of BBC fame who were also braving to travel to Islamabad. We were soon in legendary Lahore and were able to reach Islamabad before the change of date. The made to order beautiful capital of Pakistan is often described in words of poetic wit including its splendid isolation from the mainstream hustle bustle of life in Pakistan. The security 'Bandobast' was writ large all around - the 'masti and Josh-o- khrosh' was clearly missing, strikingly reminding me of period of long night of terror in our own Panjab. How long would the shelf life of terror be for our neighbour? I deeply felt like offering prayers to all the Sufi saints of the subcontinent for peace within and progress around for all the people of this ancient civilization!

Coming to the Conference, Mr Fakhar Zaman and his dedicated team of PAL colleagues presented a picture perfect in terms of courtesy, hospitality and facilities for delegates of more than thirty countries. The Pakistani writers and academicians were well represented. About 40 papers were presented on different dimensions of Sufism and Peace. Fakhar Zaman had himself set the parameters in his inaugural address dwelling on the role players by writers in the revolutionary progressive movements in the of world, including Pablo Neruda, Andre Malraux, Camus and Faiz in Pakistan. The strong delegation of Sweden led by eminent poet and peace activist, Peter Curman, mooted the idea of, 'Peace Cruise in the Indian Ocean' of writers and intellectuals on the similar cruises earlier in the Baltic, Black and Aegean. In a departure from scheduled programme and amid tight security, the delegates were hosted and addressed by President Asif Ali Zardari at the President's House. Sardar Asif Ali, the influential Minister of Education, also participated in this function.

Mr Zubair Rizvi of India who was not listed to present any paper but was specially asked to speak gave an eloquently detailed account of of the strong manifestations in India of the Sufi inspirations in various realms of arts like dance, theatre, painting, music, etc. and mesmerised the audience by concluding with his popular poem, 'Aman ka Geet' Mr Tulsi Diwasa Joshi of Nepal was also listened with deep interest for poetic presentation profused with his poetry in English. Mr Salman Taseer, Governor of Panjab made an impressive address, qouting Allama Iqbal and other Sufi saints in the morning of of 16th March. Mr Mahmud Erol Kilik, a prominent Turkish scholar on Tasawwuf, presented a competent paper highlighting contribution of Ibne Arabi as a Sufi philosopher. I was suddenly asked to be in the presidium in pre-lunch session. I shared my intellectual and personal encounters of the Sufi kind, particularly highlighting the unique contribution of Sufi saints in the the spiritual and literary heritage of Panjab and that Baba Farid's poetry has been given the singular honour of inclusion in the Sikh scripture Guru Granth Sahib. There were several lady scholars who read interesting papers referring to message of love of humanity by Sufis irrespective of all divides. The cultural show with by students of University of city Gujrat on 14th March was impressive with background Panjabi Sufi poetry and, most surprisingly, Amrita Pritam's celebrated poem on Partition, 'Ajj Aakhan Waris Sha nun...I appeal to Waris Shah.’

The media attention to the Conference on a daily basis, perhaps as some calculated measure, seemed moderate though several younger TV reporters were at the venue and recorded interviews, particularly with the Indian participants to be telecast later. The TV channels seemed quite flourishing in terms of live discussions on current national issues. Mr Fakhar Zaman, in a briefing on 18th February, had said that Mohtrama Benazir Bhutto Shaheed had desired in her address to the International Conference on 'Literature, Culture and Democracy', held in Nov 1995 that such a Conference should be held, 'to highlight Pakistan's soft image in the world'.

The observers have pointed out that the rising tide of extremism and terrorism in Pakistan since 2007 had led even the Musharraf regime to turn to Sufism to counter 'Talibanized Islam' particularly after army action on the Red Mosque in Islamabad in July 2007. The PPP led Govt since February 2008 has two prominent Feudal Pirs in PM Youssaf Reza Gilani and the Foreign Minister Shah Mahmud Qureshi. The PPP Govt has revived the National Sufi Council and has been seen inching closer to Barelvi movement and sectarian groups opposed to Deobandis and the Taliban. It is pointed out that the number of Pakistani madarasas had grown from 250 in in 1947 to around 10,000 in 2002 with over 1,50,000 students attending them; currently their number is 13,000 to 15,000 with highest growth in southern Panjab. The cumulative Saudi support to these madarassa has been estimated in the range of U$ 70 billion. It has been observed by the knowledgeable sources that while the Wahhabis make up only 2% of world's Muslims, they have been using their huge oil revenues to marginalise moderate and tolerant Sufi philosophy. It is also noted that while some 60% of Pakistanis are 'Barelvis' with moderate interpretation of Islam have only 13% of madrasas, 19% 'Deobandi-Salafi-JI' conrol over 70% of the madrasas in Pakistan. According to Y. Sikand, an eminent scholar of Islamic affairs, in some Sunni-Deobandi madrasas, Jihad (Holy War) against Shias is as much a religious duty as jihad against non-Muslims: any space for culture of dialogue simply does not exist.

While in modern epoch, the US/West has to share some historical blame for supporting autocrats/tyrants in the Islamic world as well for having 'mid-wifed' the one dimensional Islamic radical sect to spite the former adversary, the Soviet Union, time has indeed come calling the Islamic political & spiritual leadership around the world to rise to the occasion to face the new millennium with the pristine truth and a fresh outlook. Islam, as the largest Faith of Humanity with the most magnificent civilizational contribution in the history of mankind, has to play a vital role in furthering the cause of peace and prosperity for race of Adam inhabiting this planet. To quote one of the verses of Maulana Jalal al-Din Rumi (1207-1273 AD) in which God tells Moses:

Thou had been sent by God, O Moses Not to divide but to unite His creatures.