Lost and Found in World of Books 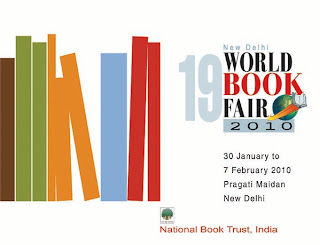 The 19th Biennial New Delhi World Book Fair (NDWBF), was held from 30 January to 7 February, 2010, in the sprawling Pragati Maidan. The National Book Trust Directory stated that the Fair, spread over 42,000 square metres, with over 2,400 stalls and stands by 1,200 participants including 35 foreign exhibitors from 15 countries, 'showcased the diversity of one of the largest book industry in the world.' It was highlighted that the 19th NDWBF, in view of the capital hosting the Commonwealth Games during the year, had a special Theme Pavilion of books on various aspects of Sports, 'Reading our Common Wealth.' The Pavilion hosted several sports legends including Milkha Singh. There were exclusive Youth and Children Pavilions as well as the 'Collective Exhibit on and by Pandit Jawaharlal Nehru.' As per practice, many eminent writers were felicitated at functions of book launches, discussions on publishing and related issues. 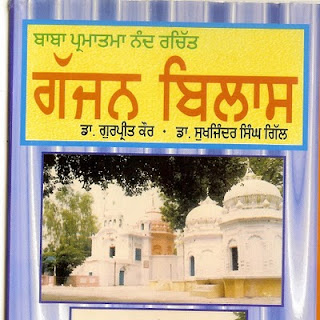 Since returning to Delhi in December 2003, after a stay in seven different capitals spanning a period of over 21 years, I have been again an avid visitor to the last three editions of the NDWBF in the company of Vijay Mangla, my durable librarian friend of more than four decades. This year, I first visited the fair on Wednesday, 3rd Feb for a very special reason: to pick up the copy of Baba Pramatama Nand authored book, 'Gajjan Bilaas.' Why was the Book so very significant for me? Well, the family elders had always told me that I was the veritable golden apple of his eyes Pramatama Nand Ji whose dearest great-grandson I was. And it was he who had given me my name, even before I was born! He was reputed to be the most eminent scholar and Ayurved-physician of the area. He was the most revered Guru-Pitamah of my father, Vaid Haridial Nand, himself a distinguished classical scholar and Ayurved practitioner!

As a child of four I had mounted on the strong and broader shoulders of my eldest maternal uncle, performed the duty of honour to the esteemed departed by waving the sacred 'Chaur' - the fly-whisk at his 'Bavaan' - funeral procession - on October 19, 1947. My real great-grandfather Baba Giata Nand Ji, elder brother of Pramatama Nand Ji, passed away on August 20, 1951 and I had performed the same duty again. The only sister of my five great grand fathers, Chetan Kaur by name, called Bhua Ji by the entire village, had been residing in the parental home since all the members of the family of his in-laws who were doing business in Calcutta had died during the epidemic of influenza in 1918. She had survived being on a visit to Panjab and lived long enough to expire in 1960. She had been telling me all the long tailed tales of 'jagg beetian and hadd beetian' - the stories of others in the world as well as those of personal and family experiences.

Coming back to the book, 'Gajjan Bilaas', literally penned in the early thirties of the 20th century. It refers to the chronicle of the first Patriarch of our family, Baba Gajjan Shah, also called Laal Singh / Mastaan Singh, a much admired and sought after saint of great spiritual attainments of his time. The book, quoting verifiable sources like the orders of rulers of states of Malerkotla, Patiala and Maharaja Ranjit Singh, determines that Baba Ji lived from 1734 to 1839 AD. The author has adopted the traditional, 'Janam Sakhi' style of narrating the main events - including miracles of spiritual powers - of the extraordinary life his great grandfather whose parents of nobility had been blessed by Guru Gobind Singh Ji. The language of the book, originally of large sized 470 pages, in Gurmukhi script, in impeccable hand of Pramatama Nand Ji, is exalted Hindi Sant-Bhasha with frequent resort to classical poetic forms of Doha (couplets), Chaupai, Kabitt etc. I had been hearing and 'overhearing' so much about this family chronicle from my father, grandfather and great grandaunt Chetan Kaur ji, particularly quoting poetic pieces. It may be mentioned that Baba Pramatama Nand Ji had died issue-less, and while all his properties and material belongings etc were claimed by a nephew, the various books, medicines, music instruments etc were claimed by my father (Born August 30 1920) who had been studying at the feet of his Guru-Pitamah since his early life.

It was in 1992, 14 years after passing away of my father, that I could persuade my family that a few photo copies from the original 'Gajjan Bilaas' be made. The first copy was placed at the Samadhi of Baba Ji (photo on title of book); one was given to Prof Pritam Singh Ji of Patiala who knew my father and one has been travelling with me across continents. It has been indeed a brave task on the part of Dr Gurprit Kaur, Assistant Professor of Panjabi in PU, Chandigarh, a daughter in-law of Baba Ji's village, to have undertaken the task of 'Translation and Edition' of this significant work in the evolution of prose of Panjabi. I do not want at all to belittle the tons of labour of love involved in imparting a contemporary readable form to this work compiled more than four generations earlier, but would have certainly wished a much more rigorously researched approach in placing the work in its more appropriate and broader context - historical, literary, poetic and above all spiritual. The book begins with an erroneous sentence and is replete with incorrect 'Pad-nikherh' separation of words written in old all-joined style. Some portions of the original text have been omitted without giving any explanation in the preface.

The Deras have been currently more in the news for dubious deeds and divisive issues, the life and work of a saint-scholar-physician like Baba Pramatama Nand Ji certainly tell us golden tales of institutions comparable to Academies of celebrated Greek philosophers. Long before the British schools for the common people, more so in native states like Malerkotla, appeared on the scene, the personalities of the calibre of Pramatma Nand Ji were using their own resources to impart a multi-purpose education including classical languages, medicine cum pharmacy, instrumental / vocal music, not to speak of Yoga, horse riding, chess and even cooking! I am proud of my father who could come upto to all expectations of his Guru-grandfather Pramatama Nand Ji. I always pray to be fractionally as well learned as they were-without recourse to English!

As for the Book Fair, I and Vijay Mangla again roamed about in far flung halls of book stalls like 'lost and found' children, on Saturday, 6th February. We were keen to attend a meeting of octagenarian Hindi author and acclaimed editor of prestigious 'Hans', Rajinder Yadav with the readers but instead ran into Prof Mahip Singh, Hamanshu Joshi and others. I could again meet the young man at the big book stall of Bible Society whose name, surprisingly, turned out to be BR Ambedkar - told him with blunt affection that he has a tough task to live upto the reputation of his name! We bought a copy of 'Heer Ranjha' by Kaife Azmi, i.e. the text of the script in poetry of the film - we had seen this film together when I visited Delhi for the first time in June 1969 - sweet memories should not be be allowed to lapse! I also purchased a set of books to learn Sanskrit along with a DVD brought out by Rashtriya Sanskrit Sansthan, priced most modestly - Rs 220/- only; never too late to learn something new! I also bought two copies of Krishdvaipayan Vyas, a masterly book by Bengali scholar Narsinh Prasad Bhaduri. It elaborates the most fascinating multifaceted character of the creator of Mahabharata. The visit to the eight book stalls of Panjabi revealed almost a deserted look. When i asked one of the owners about the future of Panjabi, he was candidly frank - the large Panjabi community of the capital should be interested to know what he had said. Interestingly, the book Gyan Sarovar which I had mentioned in these columns as the book I had bought in December 1957 for the prize of two rupees given to me by teacher Ashni Kumar Ji in ninth class was available for Rs 125/-still worth the amount!

The RSS had put up an impressive stall showing video film of Guru Golwarkar's life while leftist publishers appeared invisible. The books of Jyotish and Vaastu Shastra were selling like, what I learnt at school, like hot cakes. The future - and even past - would seem to hang heavy over the present which surely carries both in its soft belly! The books seem to hold key to all the three dimensions of Kaal-Time - a cyclical concept in the heritage of India. Talking about books is a never ending topic-more of of it later.
Posted by Bal Anand at 12:55 AM