This article appeared in the monthly magazine, Identity,  August 2013 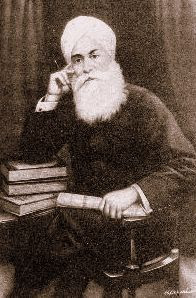 Bhai Kahn Singh Nabha (Aug. 30, 1861-Nov. 23, 1938) has recently received the most deserved attention as a rare breed of a deeply disciplined scholar-aristocrat. According to the modern researchers, he was indeed the tallest figure of the Sikh resurgence with the focus on Punjabi in Gurmukhi script during the complex socio-cultural and religious fermentation in the colonial Punjab. The life of Bhai Kahn Singh need be examined as an inspiring saga of the monumental dedication and labor of love in interpreting the Sikh scriptures in proper perspectives in their relationship with the other relevant works of divinity and principles of Indian literary traditions. He could single handedly accomplish what would seem beyond the combined capacity of the many times well provided teams of scholars in our contemporary academic institutions. The small princely state of Nabha situated in the back waters of Malwa region, always under the shadow of the next door larger Patiala state with its colorful rulers, has surely earned a rank above all the other states of formerly PEPSU because of the name of Bhai Kahn Singh associated with it. It is here in this sleepy town that seekers of scholarship and learning come across the brightest example of the pen proving mightier than the sword and tons of wealth.

As someone luckier to be born in the family of saint-scholars who had been imparting for generations the traditional classical learning in my ancestral of village of Falaund, 7Km from Malerkotla, I had been an innocent child witness to the rapidly disappearing old world way of learning. The Ashram type education of the Dera was free of cost, with the provision of even food and shelter for those who needed it. I vividly recall the entire sublime process of composing the handwritten books and preparation of Ayurvedic medicines under the benign supervision of my great grandfather Baba Pramatma Nand Ji who passed away on Oct. 16, 1947. The names of the eminent Gurmat - scholars, learned commentators on the Sikh scriptures and the Kaviraj - poet physicians - like Giani Gyan Singh, Giani Ditt Singh, Pandit Kartar Singh Dakha, Kalyan Dass Udasi, Hakim Kehar Singh of Kurali, Granthi Chanda Singh, Sant Attar Singh, Raj Vaidya Ram Prasad of Patiala and, of course, Bhai Kahn Singh, could be heard in the conversations of the elders. It was, however, in Dec. 1949 that I had listened to my father discussing passionately a recent debate in Patiala about the Punjabi language and how Bhai Jodh Singh had physically waved around on the stage the big volumes of Mahan Kosh – the Great Dictionary – by Kahn Singh Nabha to prove the point that Punjabi was indeed rich enough and developed to be the official language of the state of PEPSU / Punjab!

Bhai Kahn Singh was again the focus of my attention in the DAV College, Jalandhar, in Aug. 1966 when I had just realized my dream to be a lecturer. The vague expectations and anxieties were surcharging the atmosphere in the truncated ‘new’ Punjab in the wake of the reorganization of the state and the re-emergence, after evaporation in 1956, of the region of PEPSU as a more powerful political player. It was Prof VP Malhotra, my teacher and then guide as a colleague, who mentioned to me the name of Bhai Kahn Singh and his book, ‘Ham Hindu Nahin - We are Not Hindus’ as one of the first treatises of separatism among the Sikhs. I was, however, acutely aware of the references, listened to as a child, in the conversations at home that Swami Dayanand had used some derogatory expressions for Guru Nanak Dev Ji and how Giani Ditt Singh, the sharp witted scholar-orator belonging to the so called low caste, had out witted the Swami Ji in an open debate held in Lahore - recorded later in a booklet - titled, ‘Mera te Sadhu Dayanand da Samvad’.

I had moved on to join the Indian Foreign Service after a four year spell of sustained studies while earning much needed livelihood as a lecturer in English. The issue of Hindu-Sikh communalism which had started plaguing the Punjab in the last decades of 19th century has continued to remain a subject of concern and enquiry for me. I recall an ominous song popular soon after the Partition, “Kaun Kahe Hindu-Sikh doven vakho vakh nen; Bharat maan di doven sajji Khbbi Akkh nen - Who says that Hindus and Sikhs are separate from each other; they are like the right and the left eyes of Mother India,” - I used to wonder if the Muslim were supposedly alluded as the mythological ‘third eye’ of Lord Shiva! My lifelong intellectual interaction with inspiring teacher-scholars like Prof Pritam Singh and Prof Harmandar Singh - not to forget my unique school teacher, Ashni Kumar (1916-1999) and poet-patriot A.J. Zaidi during my posting to Iran (1975-1978) - has indeed been a soulful blessing in my continued quest of an unbiased understanding of what drives many in their deadly agendas of dividing humanity in compartments on various pretexts and the root causes of cancerous growth of intolerance towards other faiths among even educated and gifted persons. It was in this background that I had requested, and received, the duly signed by Prof Pritam Singh - datelined Dec. 12, 2000 - copy of his book in Punjabi, ‘Bhai Kahn Singh Nabha: Background, Writings and Evaluation’, published by Guru Nanak Dev University in 1989.

Prof Pritam Singh’s book, like his other pioneering research works on Punjabi language and literature, proved a trend setter and an inspiration for several other researchers including the two highly gifted and scholarly ladies of Bhai Sahib’s family. I have immensely benefitted from my careful perusal of valuable books authored by Dr Devinder Singh Vidyarthi and Dr Jagmail Singh Bhathua in my understanding the totality of the vast variety of literary and lexicological works - listed to be 23 in Prof Pritam Singh’s book - by Bhai Sahib. I undertook a serious study of the ‘controversial’, ‘Ham Hindu Nahin’ - first published in 1897 - and was impressed by its overall contents which discount the orthodox rituals and practices of Brahamanical Hinduism. He emphasizes the elements of social equality and an honest living in Sikhism. Bhai Sahib underlines the total rejection by the Sikh Gurus of the disgusting caste distinctions. It needs to be understood that Sikhism had come under serious attacks from various quarters after the collapse of Ranjit Singh’s rule. The census of 1881 had indicated the figure of the Sikhs in colonial Punjab to be 1.8 million while at the peak of rule of Ranjit Singh’s rule, their number was estimated around 10 million. The long struggle waged by the community to reassert its identity and reclaim the control of the sacred Gurdwaras should be appreciated in the totality of the prevailing circumstances. Bhai Kahn was the precocious child of his time.

All of us have our interesting memories of the purchase and use of dictionaries. I am reminded of Principal RG Bajpai who was well in known in colleges of Punjab for his ‘battles’ about correct use of English. He would always keep the dictionary on his office table; the peon would carry it along when Mr. Bajpai would be on the move and he would say, ‘An English gentleman swears by GOD (of Bible) and COD (Concise Oxford Dictionary)’. My school teacher told me about his own famous teacher, Dr. Raghuvir who had said, “Don’t quote dictionary to me… dictionaries quote me!”  Dr Samuel Johnson (1709-1784), the compiler of the first dictionary of English, had also undergone such several difficulties as faced by Bhai Kahn Singh centuries later in a land so distant and different than the island of Britain. To quote from the foreword by Prof Teja Singh, dated 18th January, 1930,


“Gurshabad Ratnakar, his Magnum Opus, is Dictionary and Encyclopedia combined of Sikh Literature, a magnificent fruit of the author’s fifteen years hard and incessant labour. It contains 64,263 words occurring in the original Sikh scriptures as well as in other allied books… when we look at the volume of the work undertaken and carried out single-handed by the author, it appears nothing short of a marvel…”

Mr. M.A. McAuliffe, the author of the celebrated ‘Sikh Religion’, had said,


“I must acknowledge my indebtedness to Sardar Kahn Singh of Nabha, one of the greatest scholars and most distinguished authors among the Sikhs.”

It is interesting to note that Bhai Sahib was conferred the title of ‘Sardar Bahadur’ for his scholarship - not the usual service of the British Empire.

I am proud of possessing the copy of Bhai Sahib’s Mahan Kosh. This is the sixth Special edition, published in 1999 - dedicated to the Tercentenary of the Khalsa. I could procure it at a wind fall price of ₹250/- against the printed ₹319/- in 2006 from the Bhasha Vibhag Office cum stall - located in an obscure and dark corner of Punjab Bhawan, New Delhi - managed by a Gurkha peon! The eminent Punjabi writer with impeccable secular credentials, Shri Gurbachan Singh Bhullar, who incidentally belongs to Bhai Sahib’s native village, has narrated the tale of the compilation for about 28 years, the tortuous efforts to raise resources and the ultimate printing of ‘Mahan Kosh’ in Amritsar, from Oct. 26, 1927 to April 13, 1930. The popular Punjabi poet Dhani Ram Chatrik, in the words of Bhai Sahib, had ensured that ‘Mahan Kosh’ was printed with the utmost care. The printing was indeed a great challenge in view if the fact that relevant words of Sanskrit, Arabic, Persian and English were also been included for explanations. The cost of the first edition of 500 copies, financed by the State of Patiala, was about ₹51,000/- ; each copy was, therefore, priced ₹110. Bhai Sahib made it clear that the author has not charged any amount for himself - it was for him a labor of love for the language of the Punjabis.

I must mention that my good friend,  Ambassador Pripuran Singh Haer - great grand (maternal) son of Bhai Sahib - graciously proposed that I should pay a visit to the historic home of Bhai sahib in Nabha. It was an immense pleasure and privilege for me to stay, on 24th March, 2013, in ‘Vrijesh Bhawan’, the beautiful abode of Bhai Sahib in Nabha. I had an intimate exchange of views with Major Adarshpal Singh - the great grandson of Bhai Sahib - about the glorious chapters of scholarship penned in these premises. I felt a strange spiritual and intellectual bond with this extraordinary scholar of Punjab. S. Divan Singh Maftoon, a distinguished journalist of Urdu who edited ‘Riyast’ to expose the wrong doings of native rulers, had the highest admiration for Bhai as a gentleman scholar. He said, “Had Bhai Kahn Singh been born in in the USA, Americans would have elected him as their President!”

Bhai Sahib’s birth day - 30th August - is also the birth day of my father, with a difference of exactly 59 years; he too was a proud scholar and true seeker of knowledge till his last. The USA has designated 16th of October as the National Dictionary Day to commemorate the birth day of the great lexicographer Noah Webster (1758-1843). It would indeed be most appropriate to declare Bhai Sahib’s birth day as  Punjab’s Day of Dictionary and Language.