Ambassador Bal Anand,
Panama 1997
The word ‘neta’, originally from Sanskrit, meaning ‘a guide, a leader’, has earned, via Bengali, the distinction of an entry into the Concise Oxford English Dictionary (First Published in 1911, Tenth–revised–edition in 2001, the one in my use now is Fourth impression 2006 ). ‘Neta Ji’, the suffix ‘Ji’ being a term of endearment, implies ‘a revered leader’, this prefix-title conferred by people of India on Subhash Chandra Bose, the iconic youthful leader of Indian National Congress - 28 years younger than Mahatma Gandhi - who dared to defy ‘Bapu Ji’ with a unique dignity, restraint and grace! The Google search on Neta Ji flashes in single click 1,210,000 entries in 0.19 seconds. In this epoch of rapid globalization of languages, Ghotala – scam - would surely make an honorable entry soon into the dictionaries of the five UN languages- the ‘scam’, of unknown since 1960’s, meaning fraud /dishonest scheme, is already a freely used and fully grasped ‘shabad’ in the 22 recognized languages in the Eighth Schedule of the Constitution of Bharat.

On the 15th of August, the day of the anniversary of Independence and the most painful amputation of people in the history of humanity India in 1947 when, in the stirring words of Jawaharlal Nehru, the nation awoke to ‘a tryst with destiny’, the heart beats of Indians, Pakistanis - and Bangla Deshis too - do feel, in today’s lingo, ‘Kuchh, kuchh hota hai … sensation of something, something’. In my consciousness, the first stirrings of the day were felt in 1951 as a student of 4th grade in the Mahatma Gandhi Memorial National High School in a grain market town, 20 km from Ludhiana. There was a big Prabhat Pheri - morning procession - by younger activists of local political spectrum of Congressmen in Khadi, the Socialists in several sartorial hues - and the Jan Sanghis in Khaki shorts - holding medium size Tirangas - Tricolors - raising slogan, ‘Bharat Mata ki Jai - victory to Mother India’ - and, in between, also, ‘Pakistan, Murdabaad - Death to Pakistan!’ I particularly recall the colored illustration splashed on the cover of Saptahik Hindustan depicting Pakistan as a Devil with horns and Maulvi beard, holding a flag with Moon & Star, running away from the gun wielding Indian Jawan! I feel bewildered to imagine even today: What has really changed for the separated twins since their brutal birth? Are the people commodities to be divided and displaced according to the dirty games among the power hungry maniacs posing as their saviors - Netas or Rahbr-e Qaum?

This town of my tiny rented home since the summer of 1951 till I was pulled out by destiny in the summer of 1971 to join a career of ‘representing India’ had been founded in 1905, on the cross borders of Anrezi Ilaqa and the only small Muslim state in East Punjab, by Nawab Ahmed Ali. The Nawabs boasted Sherwani Afghan descent and the marital link to Delhi ruler Bahlol Lodhi. The town of Ahmedgarh had been necessitated by the newly laid out railway line between Ludhiana-Jakhal-Bathinda. It is said that the design of town planning of Lyallpur of West Punjab had been borrowed to provide for wider rectangular road and a central Plaza which was named Gandhi Chowk on the day of Independence. The location of the town on the borders had been ideally utilized by the freedom fighters of ‘Riyasati Praja Mandal’ and Indian National Congress of Anrezi Ilaqa to dodge the police in their hot pursuit, making the new town a centre of heightened political activity’.

The trend and tradition of political consciousness had continued to persist for about two decades after Independence. The local leaders would stake their prestige to fetch all famous leaders visiting Ludhiana - 20 Km away - to address people in Gandhi chowk. I was privileged as school / college student to listen to JP, Ram Manohar Lohia, Acharya Narendra Dev, SM Joshi, Neta Ji’s nephew Sisir Bose, communist stalwarts like AK Gopalan, Sat Pal Dang, Pandit Kishori Lal not to forget great Jan Sangh orators including Pandit Premnath Dogra, Prakash Vir Shastri, Veer Yagya Dutt, not to forget many singers of patriotic songs attuned to hit film songs. Meanwhile, the character of politics and quality of leaders seemed to have undergoing a metamorphosis witnessed strange changes after national elections in 1967. The spirit of sacrifice and idealism of the era of freedom struggle, as if, had vanished in two decades! I must, however, pay my respects to the saffron khadi clad Swami Harivishnu Dass ji who gladly financed till his last all the expenditures for the function of the Independence Day of hiring the required materials for stage, loud speaker, carpets, cleanliness of the area of Gandhi Chowk etc - and would make an impressive speech praising Jawaharlal Nehru’s leadership and India’s rising prestige in the world. Comrade Tek Chand Diwana, the 88 year old freedom fighter who was also a great football player & famous for playing role of Lakshman in Ram Lila is my last surviving Neta-hero.

My thoughts on the Independence Day of India go to the poet-patriot (Padam Shri) Ali Jawad Zaidi (1916-2005). During my posting to Tehran (1975-1977); I had the good fortune to enjoy his enlightening company. When, on the eve of his departure due to retirement, I persisted in asking him about his personal encounters with the top leaders during the struggle for freedom, he reluctantly narrated the two such experiences. Firstly, the Neta Ji, the freshly elected President – Rastrapati - of the Indian National Congress in 1937 for the annual session in Haripur, “we, the group of the Students Federation of India mildly complained to Subhash Babu that we had worked so hard for his election but since his becoming of Congress, we are finding it very hard to get opportunity to meet him for deeper discussions ... Subhash agreed with us adding that he had indeed been terribly occupied and asked us about our place of stay … we hesitatingly revealed address of the obscure Dharamshala we had put in … Subhash said,” please expect me visit you after midnight … and lo, behold! Neta Ji did visit us around 1 AM and spent two hours with us talking about all the current national and international issues ...”

As regards the meeting with Gandhi Ji, Zaidi Sahib narrated how Sarojini Naidu had arranged the meeting and how their group of students got late due to his bad habit of oversleeping … Ms. Naidu was furious - cursed them and refusing to talk to them. One of the students concocted a false but clever story about a procession and police blockade of the way. The meeting was rearranged through kindness of Mahdev Desai. While his three companions touched Gandhi Ji’s feet, Zaidi did not because he believed it to be an act of orthodoxy and indignity. According to Zaidi Sahib, Gandhi Ji continued to ply the small Charkha and enquired about our activities, advising us to engage in some social service among the poor…’ I felt myself in a strangely mystic atmosphere … and effortlessly, unconsciously my hands were touching his feet when we took leave of Gandhi Ji’ revealed Shri Zaidi, in an emotionally choking voice.

Most interestingly and emotionally so fulfilling for me, I have been privileged to hoist the National Flag - the beloved Tricolor - 19 times in the foreign lands on Independence / Republic Days of India and also read out the messages by our Presidents. The 15th of August has been a day of deep reflections for me for the destiny of Bharat. Memories come crowding of the celebrations - beginning with school to Embassies of India in various continents. A really scholarly and inspiring school teacher, Ashni Kumar, made all the difference for me in the only life I can talk about. The poem in early fifties, 'phir baeson ke baad desh ne nutan jeevan paya - after so many years, the country has been bestowed a new life'; tributes in verse to patriots like Bhagat Singh, Jawaharlal, Neta Ji; inspiring film songs by Pradeep, Sahir, Kaifi - notwithstanding the challenges and privations, there appeared hope and sense of confidence in the air and in the leadership: now, perhaps, in spite of many an achievements, the masses do feel deprived on a daily basis and the air seems increasingly polluted by a sense of betrayal. We must remember what President S. Radhakrishnan had said, "the goal before our politicians must be service at any cost –and not power at any price".

Ashok, Akbar, and Nehru - the legacy is indeed long and challenging: a re-envisioning of India awaits! 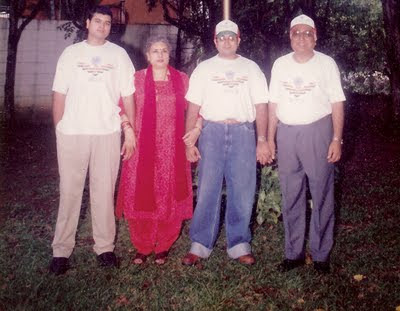 
W.H. Auden’s poem “Partition,” published in 1966. These moving verses highlight the absurdity of the way the border was created sixty two years ago:

Unbiased at least he was when he arrived on his mission,
Having never set eyes on the land he was called to partition
Between two peoples fanatically at odds,
With their different diets and incompatible gods.
“Time,” they had briefed him in London, “is short. It’s too late
For mutual reconciliation or rational debate:
The only solution now lies in separation.
The Viceroy thinks, as you will see from his letter,
That the less you are seen in his company the better,
So we’ve arranged to provide you with other accommodation.
We can give you four judges, two Moslem and two Hindu,
To consult with, but the final decision must rest with you.”

Shut up in a lonely mansion, with police night and day
Patrolling the gardens to keep the assassins away,
He got down to work, to the task of settling the fate
Of millions. The maps at his disposal were out of date
And the Census Returns almost certainly incorrect,
But there was no time to check them, no time to inspect
Contested areas. The weather was frightfully hot,
And a bout of dysentery kept him constantly on the trot,
But in seven weeks it was done, the frontiers decided,
A continent for better or worse divided.

The next day he sailed for England, where he could quickly forget
The case, as a good lawyer must. Return he would not,
Afraid, as he told his Club, that he might get shot.