The year 2009 has been curiously needling my mind about the days, months and years spent in my two schools. It was  full five decades ago that I passed my Matriculation Examination from Mahatma Gandhi Memorial National High School, Ahmedgarh, a grain market town situated about 20 km south of Ludhiana, Punjab. I have no hesitation in confessing that it was Master Ashni Kumar, my English & Social Studies teacher and Guru till he breathed his last in 1993, who made all the difference in life for me. I was back in my school on this 4th of September, to share the memories and impressions of my years in the same school with the present students. 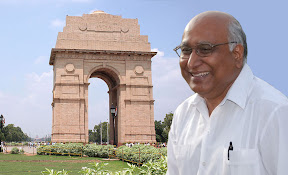 It is indeed so interesting to recall how an unusual happening had brought me to the attention of Ashni Kumar, a senior teacher, when I was a student of fifth class. Sohan Lal Joshi, a much younger teacher, considered bit of a maverick, had become a popular figure in our town by playing the role of Gandhi Ji in the drama staged in the school. He had awarded me 75 out of 75 in the paper of Geography in the December House Examination in 1953. This became a talk of the school because full marks were generally considered possible only in Mathematics.

Headmaster Hari Krishan Dutt, a staunch Gandhian and President of the Congress Party of Tehsil Malerkotla, had introduced the social service day on Saturdays for students from fifth to tenth classes along with their teachers. All used to work on a project of leveling and earth work of a 5 km stretch of a path to be linked to the main Ludhiana-Malerkotla road. It was during one of this work and fun session that my class-in-charge teacher Baldev Singh Maudgil asked Master Ashni Kumar if a student can be awarded full marks in subjects of social studies like Geography. Ashni Kumar unexpectedly asked, "But who is the student?" I was soon located and presented before this skeleton-thin bespectacled man who had a reputation in the area as a strict but most competent teacher of English & Social Studies. He asked my name and advised me to meet him later, when I would be in the sixth class, studying in the other building of the school used for higher classes. 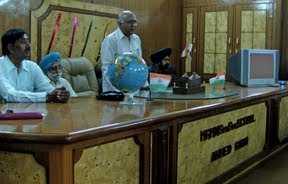 As to the secret of my full score in the paper of Geography, I might explain that I had happened to read some parts of the text book of Geography belonging my uncle, a student of tenth class. The topics about the Himalayas, the ocean, sea ports, the land surface of India, forests, etc were the same as of my class. I had written my answers in greater detail than what teacher had dictated to us in the class notebooks! Ashni Kumar invited me to join the Literary Circle in the school, started by him. He guided and encouraged me to participate in the programmes of the school on Republic Day, Gandhi Jayanti, Children's Day, etc. In my eighth class, I was selected to participate in a debate in the school broadcast programme of the All India Radio, Jullundur. It was a uniquely joyful and significant experience for me. To my great surprise, I was paid Rupees 7 and 50 Paise by All India Radio for my two and a half minute participation! The amount was presented to me at school function on 14th November, 1957.

Ashni Kumar became my teacher of English & Social Studies for ninth & tenth classes. I was awarded Two Rupees by him for obtaining the highest marks in English in the very first test, the September Test, of ninth class. When he later asked me what did I do with the money, I told him that I had bought a book of general knowledge. He asked me to show it to him. It was a large and well bound - Gyan Sarovar (pool of knowledge) - brought out by Publication Division, Government of India. He glanced through the book, kept it, and at once gave me a note of Two Rupees saying, "You may buy another one", which I did. Later for many, many years, this book remained my favorite gift item for friends, with price continuing to soar as high as Rupees Fifty!

I remember how he had given special coaching to us - a group three select students - during one month of the long summer vacations. He taught us how to read 'The Tribune' newspaper; the word 'coup d'état' was added to our vocabulary on 15th July 1958 in the context of the bloody overthrow of monarchy in Iraq! He guided me, as a class monitor, to write a letter to the publisher, requesting supply of Test Papers by VPP - explaining what Value Payable Parcel implied! When in the tenth class I was selected to play for the District Cricket Team and was required to attend the ten day coaching camp, he arranged that I could appear in the December Test later at his home provided I did not 'see' the question papers - and I complied with his instruction!

My Matriculation Examination over in March 1959, he would call me to his home to recheck the totals, etc of the university papers of Geography that he was evaluating. He made me read a few of the best attempted papers asking if I had also written similar answers. Incidentally, I obtained 50 out of 60 in Geography, 83.3 % - quite okay by the standard of those days. Since I was never a top scorer in Math, my score of 660 marks (79.8%) was considered commendable. It required a lot of courage of conviction on my part to opt for pursuing the stream of Humanities in college. I think that Ashni Kumar, and also my father, approved knowing my over all interests - distant dream being woven around academics, and of course the Administrative Services.

It is interesting to recall that Arun Kumar of D.A.V. High School, Gurdaspur had topped the list of successful candidates with 751 marks out of a total of 850. Usha Anand of Alexandra High School, Amritsar had stood first among the girl candidates obtaining 724 marks. As per the result declared on Tuesday June 16 1959, the total number of candidates who appeared in the examination was 123,287, out of which 68,406 had passed. One would wonder where the two toppers are today. Kanwal Sibal and Ashok Bhan of the Punjab University Matriculation class of 1959 have respectively occupied the prestigious positions of the Foreign Secretary of India and Justice of the Supreme Court of India.

I should mention that I had started my schooling in September 1949 joining the District Board (soon named Goverment) Primary School in village Sohian situated in what was then still called Angrezi Ilaqa, a couple of kilometres from my native village falling in Riyasati Ilaqa of erstwhile state of Malerkotla. It was a two room kutcha-mud-structure with two teachers for the four classes, with about 60 students. At the time of my admission, the head teacher Pandit Lachhman Dass had asked my father, "Vaid Ji, do you want the boy to pursue higher education or you would prefer him to take up service sooner?" I recall distinctly that my father had politely replied, "We wish that he should go for as much higher studies as he can." The practical wisdom - or trick - perhaps, was that if someone was keen on seeking a job soon after Matriculation, his date of birth could be put in a year that would make him closer to eighteen years, the minimum age for entry into Government service!  In my case, I think that I have to be beholden to the wise head teacher of the village for bestowing an extra year of service at one of the highest levels of the Government of India!

I had joined M.G.M.N. High School, Ahmedgarh in May 1951 in the 3rd grade. The town seemed to me to be surcharged with an atmosphere of patriotic fervor in the wake of recently won freedom of India. The school was indeed the playground for local politicians and also the centre of cultural activities of the town. The Kavi Darbars by the local Sahit Sabha, Ram Lila, and regular discourses/Kirtans by visiting saints & Munis, etc was mostly held in the school ground. A number of new teachers were migrants from Pakistan and students found their accent of Punjabi quite alien and even funny; they would often imitate their styles. A young socialist leader, Tek Chand Diwana, had used the Gandhian weapon of fast unto death in October 1955 over his demand that the committee for managing the school should be democratically elected. The Deputy Commissioner of Sangrur, Satya Dev Bhambri - slim and in simple dress - resolved the problem by conceding the demand and offered a glass of juice to the fasting Gandhian! My father, pointing towards him, had told me that he had qualified the examination of Independent India's new top service called IAS and that his father was a small-time shopkeeper!!

When I look back in 'Wordsworthian' tranquility and reflect over memories of my magical school times, millions of, 'diyas' - tiny earthen lamps - get lit up… The morning of my IAS, etc result … my name among the successful candidates … I come home and touch the feet of my father who says, "Bal, please do go to Master Ashni Kumar Ji, before you get busy." I reply, "I have already visited Master Ji before coming home to you."… "Well done, my boy … when a tree grows taller and bigger, many would come to rest under its shade and many would appreciate its fruit … but the tree must remember the gardener who nursed and looked after it when it was a tiny plant!"

Visit to your school is a nostalgic experience. Our batch is going to meet this year at the school after three decades.

We are looking for friends whom we have not seen since decades.

Bal Anand ji
My name is Priya Vrat (now add Bhardwaj) together with my younger
brother Satya Vrat I passed Matriculation from M.G.M.N. IN March, 1956. We used to live in Dhurkot with my grandfather Dr. jiva Ram. We used to walk to school about 2 miles. The school fellows used to call us african as we had come from africa. Many used to wonder why we were not black
Ashwani Kumar ji did teach us in
grade 6 or 7. So did master Chokha ram ji.
Among my friends were
Bhushan Kumar Puri at whose place I stayed when I went to get married in 1972.
The others
I think one teachers name was Chokha ram but I can't remember.
Friends
Prem large fellow
Fellow selling fruit in the circle,
If you joined M.G.M.N in 1951 then you just missed us.
The guy who started selling milk in Ludhiana. His father had a grocery shop.

I once heard my name had been placed on the board as I stood first in matriculation in 1956.
Wonder whether it is still there.
We returned to Kenya in late 1956 and we started working there.
Came to Canada in 1972 and have been here ever since.
priyabhardwaj7@gmail.com
priya vrat