Tribute to the True Hero of Everest 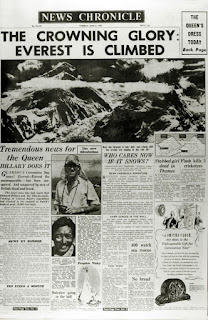 THE date of May 29, 1953 has got inscribed in the memory of mankind as the glorious day when man stood tallest on the planet ... See article (link expired, full article coming here soon)
Posted by Bal Anand at 3:56 AM

The year was perhaps 1977. Sir Edmund Hillary was on a boat expedtion negotiating the river Ganga from its orignis at Gangotri in the Himalyan foothills to Bengal where it finally meets the Bay of Bengal. Along the way, Edmund Hillary's expedition reached Patna. He was given a warm welcome at the St. Xavier's School, which has stood just a block away from Ganga since 1947. The School had the honour of being addressed by Sir Edmund Hillary in one of its daily morning assemblies. Hillary's photo on the occasion autographed by the legend himself, is still there framed on the wall in the School. I joined St. Xavier's School two years later and thus could only hear about the legend from other prvileged students and teacher who had met Hillary in real. One can only imagine how many millions of students and how many generations Hillary inspired and still continues to inspire.