This article was first published in the monthly magazine Identity, in the June 2014 issue. 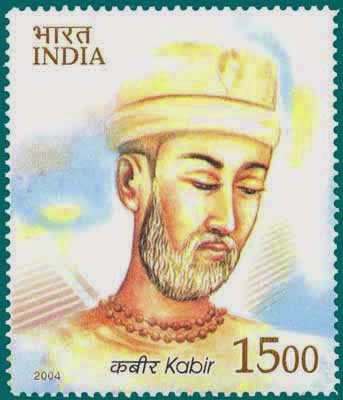 Kabir - the low caste Julaha, weaver - a bona fide ‘Korie’ voter in the current context of the mythological Brahmanical city of Benares a.k.a. Varanasi - has indeed witnessed a remarkable up-gradation of his stature during the last century. He has been hailed as a valiant saint-poet, a distinctly rebellious voice of a social reformer and a Messianic icon for the oppressed people of his epoch. He has been increasingly recognised as ‘a dare devil spiritual ideologue’ for displaying a rare courage of convictions and as an all-embracing poetic genius in hitting as hard as he could at the hypocritical, irrational and unjust practices of both the moribund Hinduism and aggressive Islam. Kabir has been hailed for his masterly magisterial pronouncements employing the most effective instrument of poetic satire. He certainly lifted the level of his saintly sermons to a refreshingly redefined realm - far beyond the prevalent traditions of Bhakti-Sufi School of Nirguna - Formless, Monotheistic - devotional movement.

The exact details relating to the life of Kabir have remained shrouded in uncertainties, as per the splendid ancient Indian traditions of ‘Smiriti/Shruti - remembered/received’, implying mainly the orally transmitted accounts. Kabir’s hymns had, of course, started getting transcribed more than a hundred year after his passing away. It has now been broadly agreed upon by the Kabirian scholars that this most extraordinary saint-poet had his earthly sojourn sometime around 1440 to 1518 A.D. The earliest account of Kabir has been recorded in a poetic work called Bhaktamal - ‘A Garland of Devotees’ compiled in C.1585 by Nabhadas who refers to him in a single stanza,

“Never did Kabir accept /
Distinction of caste ... Religion devoid of love /
is heresy, he declared.”

Many of the compiler-commentators and Kabir’s sectarian followers called Kabir-panthies have been busy weaving a halo around him that has gradually obliterated the original lustre and subtly distorted his pristine precepts leading again into ritualistic Brahmanic folds. Anantdas in Parichai - an introduction (C.1595); Priyadas in his commentary on Bhakatamal and Mukund Kavi in Kabir Chrit (1645) reconfirm him as a Muslim weaver living in Kashi but without any comment on stories about his birth. Saint Guru Ravidas, a contemporary of Kabir, according to some sources says,

“He whose ancestors slaughtered cows ... attained such height that he is revered in all three worlds” - Adi Granth, Malar, p.1203.


As an inquisitive and compassionate child of his loving parents, Kabir is alluded to be keenly inclined towards learning at an early age. But how could a poor and low caste fellow fulfil his yearning for knowledge in a hierarchical society driven by the scripturally ordained caste system of the Hindus? There is a strong traditional evidence suggesting that Ramanand, a relatively liberal Vaishnavite saint, had grudgingly taken Kabir under his wings and the two together sought to realise the higher Truth. The single hymn of Ramanand included in the Adi Granth proclaims,

The incorporation of Kabir’s 532 verses in 16 Ragas - melodies - the third largest in number after the compiler Guru Arjan (2312 verses in 30 melodies) and the Guru Nanak (869 verses in 17 melodies) in the Adi Granth, compiled in 1604 A.D., was indeed the most significant authentication with far reaching spiritual consequences for positioning of Kabir. The tradition confirms that Guru Nanak had met Kabir on several occasions for detailed spiritual discourses. It is further believed that Guru Nanak could have been the first to get Kabir’s verses transcribed and passed on the manuscripts to his successors. According to Giani Gurdit Singh, Kabir’s contribution as an inspired saint poet indeed stands apart not only in terms of the output but also for the versatility of themes indicating his own inner development with the excruciating experiences of his long life.

There are anecdotal references that Kabir had to face the wrath Delhi ruler Sikandar Lodi (1489-1517) in the wake of complaints against him by the Muslim Qazis and the Brahmin priests. Kabir’s poetry, therefore, appear to be directly addressed to listeners - of any religion or caste - with the trade mark, Kahai Kabir, suno Bhai sadhu - Kabir says, “Listen, O brother monk!” The passion packed and cryptic couplets engage the audience to wake up and peek within - “Kabir pounds away with questions, prods with riddles, stirs with challenges, shocks with insults, disorients with feints.” Kabir is indeed unique among the Bhakti poets in overwhelming us with his mastery of the vocative - “Pandit... let me know how to destroy transiency... You, Mr Qazi, who told you to swing the knife?” The impact of Kabir’s pithy poetic sayings must have been profound on the people crushed as they were in the crude formalism of the two competing mainstream religious divides. To quote Kshiti Mohan Sen, a scholar of Bengali Renaissance, “Kabir’s superior spiritual achievements came to have a sovereign influence on the people... his influence, direct or indirect, on all liberal movements that occurred in medieval times after him is uncommonly deep.” Since the last quarter of the eighteenth century, the western scholars, in their pursuit of study of Indian religious traditions and spiritual literature, had started taking a serious notice of Kabir’s remarkable hold on the common folk of the land; they hailed him as one of the greatest mystics and religious reformers in India. Swami Dayanand, however, remained adamantly hostile to all the leading lights of the liberal Bhakti movement describing Kabir - and Nanak too - as illiterate commoner, “Pandits refused to teach Sanskrit to this low caste weaver... Tab oot pattaang bhasha bana kar julahe aadi neech logon ko samjhane laga - then he started teaching low caste weavers, using crude and unbecoming language...” - Satyarath Prakash, 60th Edition, July 2005.

Rabinder Nath Tagore’s anthology of the translation of 100 hymns of Kabir, published in 1917, with a comprehensive introduction by eminent Irish mystic-pacifist Evelyn Underhill (1875-1941), opened the flood gates of Kabirian studies in the major vernaculars and European languages. The foreign scholars – cum missionaries were ‘clean bowled’ by the weaver-poet from Kashi and, in their enthusiasm, hailed him as ‘the Indian Luther’. The work in English of scholars like G.H. Westcott - Kabir and Kabir Panth, 1907 and the French researcher charlotte Vaudeville stating, “Kabir prefigured Tyagraja and Tagore and could even be considered the Gandhi of medieval times”, resulted in inspiring many more to undertake in depth studies on Kabir. Among the publications in Hindi, mention must be made of the monumental Kabir Granthavali series edited by Shyam Sundar Dass, Mataprasad Gupta, Parasnath Tiwari and many other eminent scholars. There were several editions published under the Bijak title. As regards the recent classic literary studies of Kabir, the writings of Dr Gobind Trugunayat, Acharya Hazari Prasad Dwivedi, Acharya Parshuram Chaturvedi and Dr Ram Kumar Verma have indeed made path breaking contribution.

The more recent interpretative studies of Kabir’s life and writings have dwelt more emphatically on his seminal relevance as poet-thinker-fighter for social justice; freedom of conscience; secular values in life; peace, understanding  and welfare of all. Kabir’s sublime couplets underlining the nobility of character; kind behaviour; honest living and fellow feeling effortlessly pierce deeper into the soul. Kabir’s frontal attack on the most callous caste system has make him an icon of the new age Dalit assertion. The writers and artists with progressive outlook and activists of secular forums have been amazingly innovative in rediscovering and reclaiming Kabir. We are also witnessing fiercely scholarly debates among outstanding Kabirians like Dr Purushottam Agarwal and Dr Dharamveer. Meanwhile the galaxy of the uniquely talented artists like theatre actor Shekhar Sen with mesmerising musical mono-act play; film-maker-singer Shabnam Virmani with her folk troupe of Prahlad Singh Tipanya and classical masters like Kumar Gandhrav - not to speak of so many popular singers including legends like Lata and Jagjit - have all made Kabir ‘a very, very cool guy’ for the 21st century among the young and old not only in India but globally.

I was indeed the most blessed as a child to be amply introduced to the Dohe - couplets of ‘Kabir Julaha’ - and many an interesting anecdotes about him - by my grandmother even before I joined the school. And then it was in the summer of 1956: I had just been promoted to sixth class. The film Bhagat Kabir ‘arrived’ in our tiny market town of Ahmedgarh - to be screened in the make-shift small Sundar Theatre. I sought my grandmother’s permission to go to cinema to see this film about Kabir - her idol saint. I assured her that I had my own savings to buy the ticket - costing a few annas. “Cinema, film, no, not at all!” was the firmly reply by my grandma. “But, Dadee Ji, it is about Bhagat Kabir... you have been teaching me his Bani and telling his stories?” She remained unmoved, “No, no; these film makers must have made it something quite different containing dirty and vulgar things - ‘gandi aur Kharab baaten’ - about the saint and adding their own strange songs and dances - ‘Bure naach, gaane.’ I had no choice - how could I ever dare to defy my most loving and pious grandmother!

To conclude: just to check references about Kabir in the google search, I put the subject, ‘Films and documentaries on Kabir’ - and, look, behold... there are 34,70, 000 results in 62 seconds!  The weaver poet of Benares has indeed gone global - and soul of my grandma would seem to approve and applaud it!!

I do earnestly hope and pray that people of Kabir’s own land would be heartily attuned with his soulful hymns of fraternity of humanity! He was never so compellingly relevant for India of Today, Tomorrow and the Day After!!!

Song from the movie Mahatma Kabir (1954)

Is it possible for a common man to understand KABIR in your way? Because it is for the spiritual raising up of the concerned but Alas that is virtually not to be included in well knit modern socioeconomic pattern of long articles which are beyond the scope of a common person( voter).any you deserve a lot for a distinguished scholarly description of saints , Sikh Gurus, At least you tried keep it up .Its well needed ,WELL DESERVED