Musings on his Eightieth Birth Day

This article was published in the monthly magazine Identity, October 2012 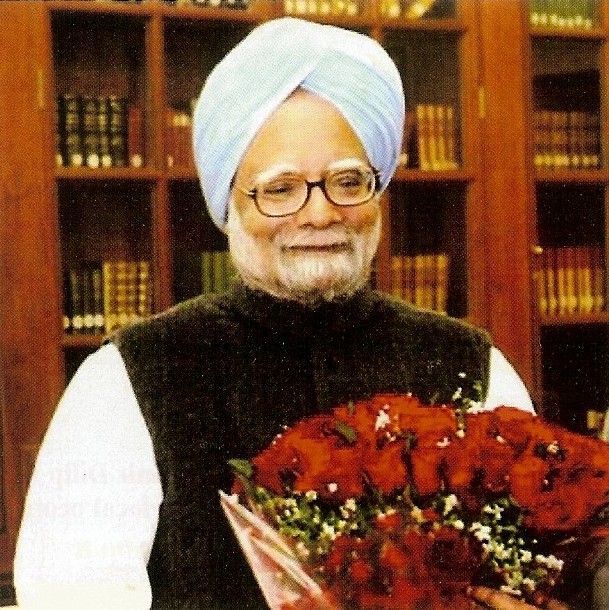 Doctor Manmohan Singh - who is personally fond of professing that 'once a teacher, he remains a teacher' - has already established established several tantalising 'records' when he turned eighty on September 26, Wednesday, as the Prime Minister of India. The gentle giant - 'Singh is King' - is credited with the rarest distinction of creating new records for every academic exam he had appeared and had studied abroad by earning prestigious scholarships. He is now ranked after Jawaharlal Nehru for having been sworn in as Pradhan Mantri immediately after completing a full five year term. He has also dubious distinction of having never won any popular direct election to 'reach' the most coveted constitutional post in the largest and most vibrant - honestly, 'tumultuous' and 'skewed' - democracy of the world during the most, according to the political Pundits, fractious - 'coalition', state of affairs in the life of the nation since Independence.

'Doctor' might have become the 'most ill-treated prefix' these days in the political and bureaucratic circles but in Manmohan Singh's case, it is in the same 24 carat 'purest vintage' of Rajindra Prasad, B.R. Ambedkar and Zakir Husain. it is pertinently interesting to recall that his thesis for Doctorate at Cambridge was, India's Export Performance, 1951-1960, Export Prospects and Policy Implications. He might have set his sights high in academics but had surely never 'dreamt' (PM Deve Gowda, for 324 days, was reputed to be 'day-dreaming' even during the highest official confabulations); aspired (Ex Deputy PM L.K. Advani has been know to do so, 24x7 for more than a decade) or had even raised his little finger (Swaran Singh is believed to have done so only once and was sacked for-ever by 'never-forgiving and forgetting', Mrs. Big G), not to think laying any claim or fight for the office.

The 'PM-ship' was indeed most astonishingly 'bestowed' upon our good Doctor, in the wake of an unexpected victory for Congress in May 2004, by the 'self-sacrificing-saint' born in an ancient civilisation of Europe know for its traditions of political culture celebrated in the words of Cicero, Machiavelli and even our Englishman friend, William Shakespeare. Our low profile and high thinking Economist - bureaucrat turned technocrat - had been initiated, mentored and tutored in the Congress culture of politics by another 'root-and-branch-less' wonder of Indian politics and the best 'accidental' PM, P.V. Narasimhan Rao, the first non-Nehru-Gandhi to complete a full term in the august office during 1991-1996.

Professor Manmohan Singh assumed the office at the venerable age of 71 years 239 days - Morarji Desai (81 years, 23 days); Charan Singh (76 years, 217 days) and I.K. Gujral (77 years, 138 days) were older to him when they became PMs. He must be holding an all time world record for working on the regular-salaried-service of the Govt. of India and its agencies: in 2010, his monthly salary as PM was indicated to be ₹ 135,000. As for details of his assets on March 31, 2012, the value of his properties in Chandigarh, House No P-1, Sector 11, purchased in 1987 - and a residential apartment, in Vasant Kunj, New Delhi had appreciated to ₹ 4.7 Crore and ₹ 2.5 Crore respectively. A car - Maruti 800 has also been mentioned in the list of his meager other assets making a total of ₹ 10.7 Crore. Defense Minister A.K. Antony has declared his assets to be ₹ 44 lakhs only.

The simple and unassuming life of the Professor has always been professed by his party to be the greatest asset of his public life. Alas, on his eightieth birth day, he stands 'coal-tarred' and, perhaps, even perceived by a large number of people of India as 'presiding over' and 'shielding' the most corrupt Council of Ministers. Having never been inclined to play any role in the organization of the Party, he had appeared isolated in the recent past when in the firing line of the forces of the opposition. In tackling the tough policy issues which would be at variance with the populist measures, the PM and his team would seem stranded without support from elements within the ruling party not to speak the ever slippery coalition partners. Many ask why Mr. Singh never 'roars' and tries to deliver but prefers to make mousy retreat.

It is widely pointed out in the professional circles sympathetic to 'Singh' - the liberaliser and reformer - 'that he had managed to perform a reasonably good job during the first five years of his term. Then started the storms of scandals of corruption and 'incompetent governance' - 'Common wealth Games'; 'Two-G Spectrum'; the 'Choice of a tainted CVC'; the 'date of birth of the Army Chief'; the 'Lok Pal Bill' etc., etc. With the 'Coal-Gate' fracas, it became a shocking serial in the newly empowered electronic media; step by step the learned Professor has been painted in the company of crooks cutting deals to corner the precious public resources. The election reverses in important states for the Congress Party and daily in pricks by the emboldened allies with their own political calculations have caused serious structural damages to the UPA-II government. The latest rounds of  'wash out' of the monsoon session of Parliament; the final 'Didi-giri' - walk out by Mamata's TMC - in the 'rain of reforms' including the FDI in the retail sector and impending elections in a few important states including Gujarat have put interrogation marks around the direction of political path ahead for the nation. The Washington Post commentary on Singh detailing his descent from, "a scrupulously honorable, humble and intellectual technocrat to ... a dithering, ineffectual bureaucrat presiding over a deeply corrupt govt", would seem to have rubbed a raw nerve.

I had set out in the opening para to muse over and felicitate, in intimate personal terms, the 'Man' of India's Destiny, who had lost is mother at a very young age - the one whose very name means 'magician / charmer of the mind'. He is one who has all along been a role model for my type: who have 'risen' in free India proclaiming the 'bare' virtues of academic excellence and integrity in the chose profession of livelihood. Dr Manmohan Singh's name was first heard by me when, after a brilliant academic career, he had briefly taught in the Punjab Colleges / University in 1954-58. The specific mention had been made by Principal R.G. Bajpai, Manmohan's senior colleague when the latter was a young fresh lecturer. A brilliant scholar himself of Allahabad University, Bajpai was extremely fond of 'picking up' errors of English language in the books/articles by reputed authors, quoting the evidence in 'COD' - Concise Oxford Dictionary! He was full of admiration for Manmohan Singh's book - but was 'delighted' to tell me: "Look, I have found it ... this diagram here has been drawn wrongly!"

I have also heard another story. A close school class fellow friend asked Manmohan to lend him note book so that he could 'copy' the sums, fearing the Math teacher notorious for giving a 'sound-good' thrashing to those who did not complete the home work. Manmohan is quoted to have replied, "I can sit enough time with you to make you understand the difficult sums ... but cannot give the note book for copying ... cheating!" Another class fellow of Intermediate in Hindu College Amritsar told me, "Manmohan would finish the Paper and come out half an hour before the allotted time of three hours ... attempting all the seven questions... only five were required to be answered... writing at the end, 'consider any five'." There are tons of legends in Delhi how his daughters used to travel by public transport to their college/university and he would never permit the use of his official vehicle for any private work... these seem to be tales of an era, of light years ago!

I was told in New Zealand by a very serious and reliable person that there was resistance by the two families to the 'love marriage proposal' by young Manmohan to Gursharan Ji - perhaps, same Gotra issue! But both of them remained firm in their determination and the elders were graceful to reconcile themselves to the will of the young couple. They both are indeed made for each other. It is rightly said that behind every successful man and there is a woman.

I have had the privilege of looking from closer physical proximity at six of the fourteen Prime Ministers of the country and speaking to four of them including Dr Singh. On the 8th of April 2004, I just had missed being welcomed by him into the ranks of Indian National Congress, at a time when the BJP had declared its victory before the elections and no astrologer was around to console the Congress till the ultimate sovereign - the voter - gave his verdict!
A very happy birth day to you, Dr Manmohan Singh!
*   *   *
Copy of magazine article is available here


Dear Bal Anandji
Thank you for sending me your intimate portrait of the PM. It has been
done with sensitivity and an empathy that the PM richly deserves.
Many thanks and warm regards
Shyam