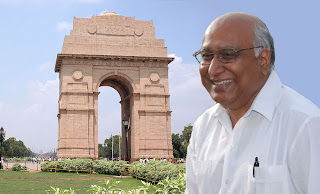 "I can tell you that there is as much to love about the city as there is to loathe."

Dear Papa-ji, the article is very nice and can easily constitute a chapter for your autobiography. This reminded me of Delhi as I remember from childhood. Our evening visits, playing in the 'shadow' of India Gate, the smell of grass on which we used to run around. The toy peddlers and snack vendors. It's one of my lasting memories of a gentler Delhi. I never really understood how close India Gate was to our home, so I took out Google Map to take a look. Looking at those old streets, Kasturba Gandhi Marg once called Curzon Road, indeed made me nostalgic.

Through this I see a side of my father that I never could appreciate growing up. I pretend my own knowledge of my birth city is suitable, if not functional (at least when it comes to driving myself and my mom and dad around town), but this only shatters that pompous illusion.
I loved the story of Papa going to the movies. My own memories are of papa falling asleep at the movie theatre! haha! The details of bricklayers and their abbreviations is such an engrossing read. I concur with Munnu Bhaiyya and insist this form part of an autobiography that I can one day share with my own grandchildren with great pride.

my dear Baal,
thanks for including me among your friends. That was a very nice write up about India gate. Like you,I too have happy memories of it !It really was a meeting place and picnic spot, the Lungs of Delhi " it was called . The icecreams vans and the seasonal "jamun" walas under the trees was another big attraction! I remember a sardarji who attached his Kwality icecream van to a motorcycle.He could travel much faster and reach more customers than the others and consequently enjoyed far higher sales than the others!We used to look forward with excitement to the jamun season which lasted no more than 15 days; the fruit then was small and of uneven quality, some sweet some not.Nowadays, the season has got prolonged into months and the fruit is also much larger and of even size and quality and yet, it was more fun to eat in those days!!

Thank you, sir, for bringing this journey to life for me.

Its really giving a refreshing perspective to our so regular historical monument.

Thanks for making me read it.

A well-written and readable piece !

Thanks for bringing it to my attention !!!